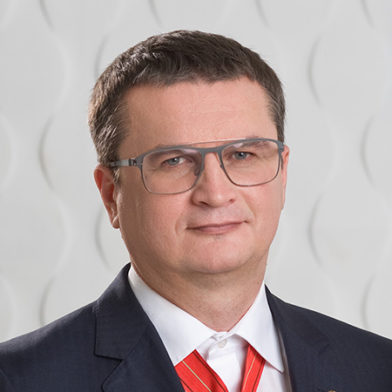 The MARTINEX company president, dermatovenerologist, the president of the Martinex International Research Center for Innovative Technologies, a vice-president of the UNESCO Institute of Microelements Lyon, France), the author of more than 15 patents for inventions, author of the books "Hyaluronic acid" and "Polysaccharides in medicine of the future." An Officer of the Belgian Order of Merit in the Field of Inventions (2015), a winner of the UNESCO medal "For the Contribution to the Development of Nanoscience and Nanotechnology" (2015), the winner of the honorary award "The Name in Science" by the decision of the Academic Council of the Oxford Academic Union (2016). “For Contribution to World Science”; his name is included in the world register of outstanding scientists.

“Our company was established over 25 years ago. During this time, and in difficult conditions of the business formation in our country, it has passed a long way of development: from a beauty parlor in Yekaterinburg to one of the largest holdings in the beauty industry with a wide portfolio of professional brands, in-house manufacture, a strong scientific base and a developed distribution network. We were pioneers in the area of mesotherapy: the first who imported mesopreparations into Russia, the first who developed and started manufacturing of domestic meso-cocktails, bio-revitalizants, bioreparants, peelings and fillers on the level of the highest world standards. Some of them have no parallel both by their formulation and mechanism of action. We are convinced that health is the most important value of a person, and beauty is one of the pillars of person's self-confidence. But there is no beauty without health, therefore our mission is to make a tangible contribution to maintaining health and beauty of our nation".

The scientific invention of "Multicomponent mesothread containing hyaluronic acid and its manufacturing method", one of the authors of which is M.A. Selyanin, was recognized as the best of 46206 applicants considered by the Rospatent Panel In 2017. The authors were bestowed the Rospatent Diploma in the nomination "100 Best Inventions of Russia — 2016."